In 1940 Allen and Hines described a pathology characterized by symmetrical swelling of the lower limbs, caused by enlargement of subcutaneous adipose tissue.

Although less frequently, sometimes the upper limbs develop lipedema and, in rare cases, the abdomen too. This condition was called lipedema or lipoedema. It is frequently confused with a disease with similar physical characteristics called lymphedema. 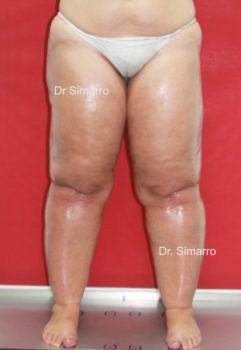 Lipedema is a chronic progressive disorder whose cause is believed to involve genetics and hormonal, inflammatory and nutritional factors. It affects subcutaneous cell tissue, especially adipocytes (fat cells) in specific parts of the body.

An increase in volume and consistency is observed in the affected area which usually progresses over time.

The condition usually affects the lower limbs. In the early stages it affects the thighs advancing into the area below the knee to the ankle (97%). Around them, the sign of cuff will develop.

However, occasionally, the area below the knee is affected from early stages. The feet will only be involved in very severe stages (lipo-lymphedema).

About 30 % of people with lipedema also have affected arms (especially in their proximal half), sometimes the abdomen is affected too.

Lipedema is bilateral and almost symmetrical. However, a thorough examination will show that one of the limbs is always slightly more affected than the other.
Lipedema is poorly known and frequently misdiagnosed both by the general public and healthcare professionals. This is one of the reasons why the medical literature includes a wide variety of terms to speak about it (lipomatosis dolorosa/ painful fat syndrome, lipo-hypertrophy dolorosa, lipalgia, adiposalgia/adipoalgesia, painful column-like legs)

Lipedema is a condition which affects mainly only women without distinction of race.

According to several studies 10 %-16% of women suffer from lipedema in its different stages (some studies state that 39 % of women worldwide may be affected by lipedema).

About 50 % of women diagnosed with lipedema present overweight or obesity. Almost all patients with advanced cases of lipedema have obesity too.

The onset of the disease is generally related to hormonal changes. In most cases it begins at puberty. In few occasions lipedema may develop after pregnancies, oral contraceptive use, menopause and ovarian surgery.

Lipedema is a hereditary disease. According to some authors 16%-20% of the patients have a family history of lipedema.

Genetic inheritance is not linked to mitochondrial DNA since sometimes, unaffected males transmit the disease to female offspring.

Only 2%-4% of the patients who suffer from lipedema are men, most of whom, are also affected by estrogenic hormonal disorders and/or liver diseases.

Currently, the cause of lipedema is still unknown. Recent research shows there is inflammation of the adipose tissue with an increase in the proportion of inflammatory macrophages (M1), which produce adipocyte hypertrophy (increase in volume) and hyperplasia (increase in number), from stem cells present in these tissues.

Enlargement of adipocytes produces as it progresses, insufficient vascularization, and poor venous return and lymphatic drainage. This produces tissue hypoxia with the subsequent increased inflammation and the establishment of the following vicious circle: inflammation-proliferation-inflammation. 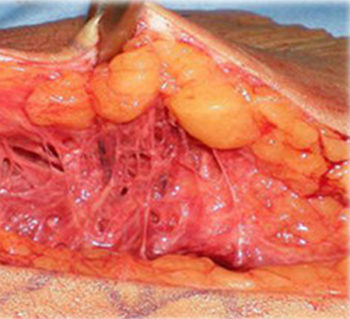 Besides, the lack of space to develop new adipocytes means that the inflamed area will become stiff and indurated, with a clear increase in capillary fragility.

The proliferation of adipocytes will produce macro lobes which will be easily observed and palpable both manually and through ultrasound scanning. The more developed the disease is the easier it will be to palpate the lobes. This is why, the histologic assessment takes into account the number and size of this macro lobes. Theses macro lobes are clearly visible in pieces of dermolipectomy when this surgery is performed in the affected areas.

Finally, in the most advanced stages of the disease, with lymphatic affectation due to compression, there will be a very important disabling affectation of the limbs, including the feet (the hands are less frequently affected). This last stage of lipedema is called lipo-lymphedema. 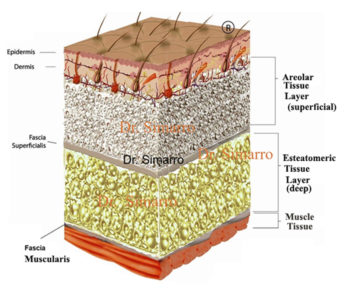 Regarding the subcutaneous cellular tissue, in the early stages, the fat which lies next to the superficial fascia (fascia superficialis) is the most affected. This fascia divides the fat layer in two compartments, superficial (areoral fat tissue) and deep (deep fat tissue).

As the condition progresses, in the late stages, the areolar fat tissue is affected close to the deep dermis. This is easily observed and palpable on ultrasound scanning and elastography.

The result of these factors combined, involves altered metabolism of adipocytes, which develop resistance to the action of some lipolytic hormones.

In simple terms, the area affected by lipedema works like a money box in which fat can be introduced but not taken out. Because of this, this area is resistant to weight loss through diets and exercise.

Therefore there are four factors affecting lipedema: Genetics, nutrition, hormones and inflammation. (Yet to be proved)

The diagnosis of lipedema is made based on the patient’s clinical evaluation, especially of the legs and with supporting tests such as ultrasound scanning and elastography.

Generally, the progression of the condition goes alongside with weight gain or is triggered by it.

Clinical signs will be clearer as the conditions progresses.

The most common symptoms are:

Types and stages of lipedema

The reports in which ultrasound scanning is used as a tool for differential diagnosis of lipedema and other conditions that affect the fat tissue, study how lipedema affects the skin (dermis and epidermis). However, they do not mention the ultrasound changes which occur in the lipedematous fat tissue as the condition progresses. 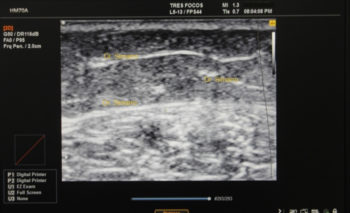 In late stages the most superficial area of the areolar layer is affected too, losing its ultrasound characteristics. We will only see fluid deposits and increased dermis thickness in lipo-lymphedema.

In this image we can see two ultrasound of the same patient. One of them shows a lipedematous area and the other a non-lipedematous one. We can see that the lipedematous area is much more whitish (hypoechoic) due to hyper-proliferation of adipocytes and decrease in interstitial fluids (fat similar to sebum) 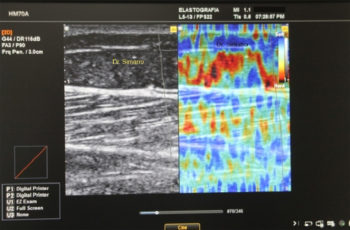 Differential diagnosis. (further examination available at the bottom of this page)

Through correct medical assessment and ultrasound scanning we will diagnose lipedema in such early stages that, without this means, it would be easily confused with cellulite and obesity.

Since genetic and hormonal components cannot be changed, our treatment will be based on decreasing the level of affectation dealing with inflammatory and nutritional components.

Regarding the inflammatory factor, as we have previously mentioned, we believe that its onset is caused by “Leaky Gut”.

Increased intestinal permeability occurs when tight junctions loosen. This is caused mainly by a protein called zonulin. There is evidence that gluten causes a large zonulin release. Furthermore, we suspect that lactose intolerance might produce dysbiosis (pathological change in the composition of microbiota) which might increase hyper-permeability even more.

When tight junctions loosen, protein structures (LPS and others) go into the bloodstream without being digested. the immune system (dendritic cells and macrophages) reacts against them, causing an immune/inflammatory reaction.

Due to this, we use anti-inflammatory medication, antioxidants, draining medication and vitamins. We never use NSAIDs or corticoids are they are contraindicated.

Following a ketogenic diet in the short and medium term (never in the long term), under medical control and supervision, is anti-inflammatory. It is the type of diet which we prescribe in this treatment.

This diet must not only be ketogenic but also anti-inflammatory, so that increased intestinal permeability is improved. It must be followed my new eating habits and maintenance treatment during six months to avoid suffering from “rebound effect”.

Due to all the aspects mentioned above, our treatment is based on the following points (always after ruling out celiac disease)

Both the specific dietary treatment and local treatment with lipomesoplasty will eliminate chronic low-degree inflammation, locally and generally , improving blood circulation and metabolism in the area affected by lipedema.

The area affected by lipedema will be very responsive to treatment so, discomfort, inflammation and pain will improve largely from the first week of treatment.
Metabolic increase in the treated area is observed. Due to this, the response to the specific diet will be more noticeable than in untreated areas. On the other hand, this metabolic increase will produce a more efficient response to the ketogenic diet.

As inflammation decreases, fluid retention decreases too. Clear loss of weight and liquids is observed in the area treated with lipomesoplasty by sequential measure of impedance.

Objectively, after treatment, a clear decrease in volume of the treated limb is observed and also a great improvement of the overall symptomatology of lipedema.

To sum up, this treatment not only treats lipedema but also its origin, avoiding relapse in the medium and the long term. This might happen if undergoing strictly surgical treatments.